Goya and the Guitar

Over one hundred people braved a severe weather advisory on Thursday, April 18th, to hear Dr. Lily Afshar, Professor of Guitar at the University of Memphis, deliver not only an interesting analysis of the etchings of legendary Spanish painter and printmaker Francisco Goya, but also her own performance on the classical guitar. Dr. Afshar’s renowned first recording is 24 Caprichos de Goya, Op. 195. The album grew out of a five-year process – the famed composer Mario Castelnuovo-Tedesco crafted the guitar pieces based on his interpretations of Goya’s etchings, but he played the piano, not the guitar. Afshar edited, practiced, and perfected the music so it would fit the guitar, while also studying Goya and particularly his satirical etchings, gaining her own inspiration from these works. 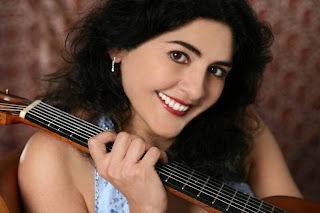 Dr. Afshar began her lecture with the general history of Goya.  He was a court painter to the Spanish Crown, and through his works he was a commentator, chronicler, and criticizer of his era. He found many faults with society and decided to make a series of aquatint prints in 1797 and 1798, and published an album in 1799 showing the “darkest moments in history.” The work was an Enlightenment critique of 18th-century Spain, and humanity in general. That Goya lived a tragic life and witnessed so much human error is what most likely inspired him to etch these cynical, yet impressive 81 Caprichos, which were so controversial to the Spanish crown that they were quickly withdrawn from sale shortly after their releasing. 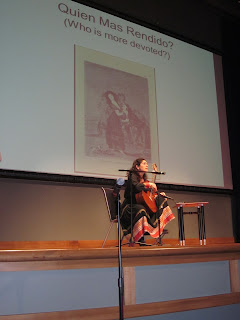 Afshar played eight of the 24 guitar pieces written to imitate and translate Los Caprichos. These performances included No Hubo Remedio (There was no help), Dios la perdone: y era su madre (For Heaven's sake: and it was her mother), ¿Quién más rendido? (Who more is surrendered?), Ni así la distingue (Even thus he cannot make her out), Hilan delgado (They spin finely), Volavérunt (They have flown), Sueño de la mentira y la inconstancia (Dream of lies and fickleness), and the most famous of them all, El sueño de la razón produce monstruos (The Sleep of Reason Produces Monsters). All these selections are found on her CD, Mario Castelnuovo-Tedesco: 24 Caprichos de Goya by Lily Afshar. 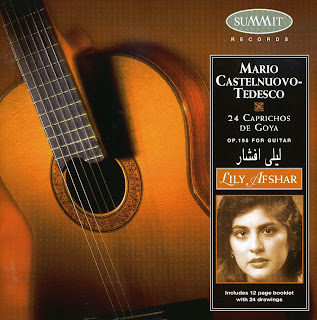 The selections were themed around such subjects such as disease, prostitution, heartbreak, and gossip—the ills of society, and the mannerisms of the aristocracy and academia.  Afshar’s spoken portion provided informative context, with the occasional lightening of the mood, such as when she was discussing how Goya sometimes depicted people as animals. More mesmerizing was her guitar performance—it was emotional, dramatic, and yet flawless. With each new slide, she brought to life through guitar the emotion and scene that Goya was trying to portray.
After a brief but lively question and answer period, Afshar signed copies of her albums and books, and she chatted with audience members.  The event concluded the Spring 2013 season for the Marcus W. Orr Center for the Humanities.  Stay tuned for a recap of the previous year and a sneak preview of the 2013-2014 calendar!
Posted by The MOCH blog at 9:26 AM

The MOCH blog
Memphis/TN, Mid-South, United States
The Marcus W. Orr Center for the Humanities (MOCH) hopes to continue the legacy, commitment, and community investment of its namesake, Marcus Orr. The MOCH Blog is an extension of the Center's events and attempts to carry the conversation from the campus to the web. Please take part in our dialogue as MOCH seeks to explore complex questions.